Skip to content
Interesting facts
Hi All…I know all of you must be following the election results now. If you  have read my post on Interesting facts about 2014 Indian elections, I have mentioned that the results and vote counting counting is on May 16th. It seemed like long away when I wrote it , but here the day has arrived. My brother was doing a count down . Amazing victory to BJP. I really congratulate Narendra Modi for a sweeping victory and I am really happy about it. The Sensex in India  had increased 1300 points looking forward to the new Prime Minister ,which Indian stock market has not seen for a while and the Rupee is strong again. It is believed that Narendra Modi will form a Government favorable for business and will bring in more foreign investment.

As I am watching the results some things that I think  lead BJP to win are:
*Rahul Gandhi’s interview : I think Rahul Gandhi’s interview was an important thing to note. After listening to that I felt that there is no way that he can become our Prime Minister.
*Modi was a strong candidate for BJP. BJP didn’t have a strong candidate for a long time after Vajpayee. As far as I know when Vajpayee was the Prime Minister , he did lot more than just worshiping a lady.
*2G scam : This was the biggest scam that we all would have heard of and still everyone involved were released and worst , were allowed to contest in the election. I dont think anyone would have wanted them to win.
*Commonwealth Games Scam -8000 crores: This scam really embarrassed India in the eyes of foreign countries and the world.
So many other scandals happened during  the whole period Congress was in power. And if you want to know more about the assets of all the Congress men , look at this image released by the Swiss Bank in 2012. 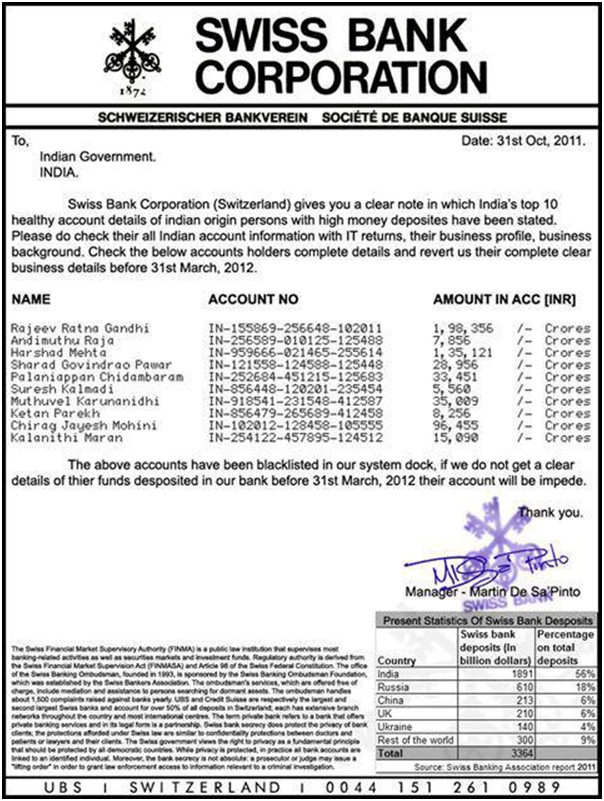 Thanks to my brother for sharing this with me. Who said Bill Gate is the richest in the world?? , you will understand that it is our own fellow Indians.