Skip to content
Life Experiences
Hello All, I am really happy today. My article covering AR Rahman “Intimate Concert”  in Austin was published in  behindwoods.com  website . Check the article here http://www.behindwoods.com/tamil-movies-cinema-news-15/an-account-of-a-r-rahmans-intimate-concert-in-usa.html. The picture in that article was clicked by me. I would like to share on how I was able to get that close and click a picture of A.R Rahman.

I am a huge fan of A.R Rahman is an understatement. I have read his biography and I admire the way he shaped his  music journey.

Sometime in February when I knew that Rahman was going to render “Intimate Concert”  in Austin on June 4th, I was so overwhelmed and was waiting for the date when the ticket sales was  going to open, for  booking my ticket. My husband is also a big fan of Rahman, but since it was a Thursday and we can’t find a nanny all of a sudden to take care of our kids (4 and 2 yrs old) , only one of us could go. You guessed it, I won and I was going to go leave the kids behind with him. 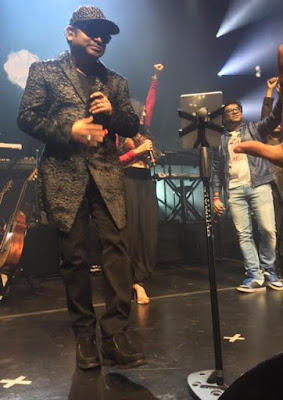 Luckily, due to huge demand the organizers added another show on June 5th. My husband was happy and we booked a ticket for June 5th. We decided to take turns and go so one of us can watch the kids. We got the tickets delivered home and then the waiting game started.

Days rolled by and in May when the concert commenced, I was closely following every tweet and news about the concert. Finally, on June 4th ,even though my husband was sick, he was all excited to go to the concert. He went to the show and gave me updates then and there. I asked him about where he was seated  and whether he can go and take a selfie with Rahman. He told me that the chances were thin, since our tickets were in 2nd balcony. That night he came home and told me the highlights of the concert. He also told me about the abrupt ending of the show and how Rahman came back.

I told him that I really wanted a selfie with Rahman. He joked ” That can happen only if you jump from the second balcony”. On June 5th, I reached the Bass Concert Hall earlier. I entered the Hall and went to 2nd balcony and sat on my seat. It was so steep that I felt dizzy whenever I saw the podium from there. I got out and practiced how to get from there to the orchestra level.

The concert began, I could see Rahman as a small white dot from my seat. I missed my husband being next to me to enjoy the concert. As I was watching I made some notes for the article I was going to write. Then when Rahman ended the show abruptly, I immediately got out of the hall took the elevator and went to the orchestra level and when the lights came back I went close to the podium and clicked many sellfies and took a few pics of Mr Rahman.

I shouted “Thalaiva Chennai Thalaiva”, I could not believe this legend was in front of me, so close. Then we all requested him to sing a song. He did sing few lines of “Oorvasi” and also gave me a hi-fi. It was a hard hit on my hand. I was in cloud nine. When all this ended I came out and could not talk.I met some friends who asked me about my life and kids. I told them I can’t talk about anything right now.

I came home and sat down to look at the pics that I clicked, believe me not even one proper selfie. In some pics only my head was seen, in others I was there but Rahman was not there. I was so sad for 3 days that I could not take a good selfie and finally got over it.

I firmly believe that some day I would  take a selfie with him. Even if that doesn’t happen the experience was surreal that I will cherish it my entire life. Thank you Rahman Ji.