Skip to content
Interesting facts
I have been hearing a lot about Curry family these days in the news. Every game this family is focused a lot on cameras than any other family.I got curious and started to read more about Stephen curry.  Stephen Curry is the NBA Most Valuable Player (MVP) and a two-time NBA All-star. He is the son of the former NBA player Dell Curry. We have not been following NBA for a while so pretty sure I have missed knowing him before.
He  plays at the point guard position and is considered as one of the best shooter in the NBA history. He played college basketball for Davidson and was named Southern Conference Player of the year and set the all-time scoring record. Later he was drafted by Golden State Warriors in 2009. Everyone describes him as “someone special”.
What is so amusing about his family?? He has a younger brother Seth and a sister Syndel Curry. He did his schooling in a Montessori school started by his mom Sonya Curry. Sonya Curry is a former basketball and volleyball player and has won state championships. She met Dell Curry in Virginia Tech and they both married in 1988 and moved to Charlotte , North Carolina where she started a Montessori school. She doesn’t look like she is a grand-mom and  never fails to attract cameras  towards her during every game. I really wonder how she looks so young.Check a family pic here , where she is holding her grand daughter 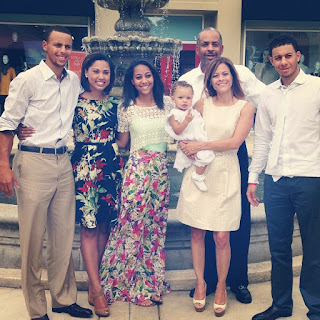 The other famous person in this Curry family is Stephen Curry’s 2 year old daughter Riley Curry. who is very sweet and never ceases to amuse interviewers. Watch this video
Stephen and Ayesha Curry are expecting their second kid in July 2015. I wish them all good luck and will continue to follow the Curry family NEWS.  Good luck to the Golden State Warriors to win the NBA finals and I will continue to follow the remaining final games.
Hope you all have a very good week and if you found this post interesting please do like my IndoUSMoms FB page to get regular updates from my blog.