Sweet Story of a dark shop

Hope all of you are enjoying your weekend. Ours was awesome, we drove down to a beach on Saturday and had a lot of fun. Will write a post about it soon. I am really excited to let you all know  that I have started to write small post for my company’s Indian Association newsletter. Recently my post got published it in and I would like to share it with you. I am posting it here today.
Tirunelveli Halwa …As soon as I hear it, it  brings water to my mouth. Since my father was born and brought up in Tirunelvi (a district in Tamil Nadu, South India),  every time my grandfather visited us, he used to bring us some halwa and  that  taste still sticks to my mouth.
I have always been curious on how this whole “Halwa” thing started in Tirunelveli. Famous shop to get halwa in Tirunelveli is  “Irrutukadai”(dark shop). 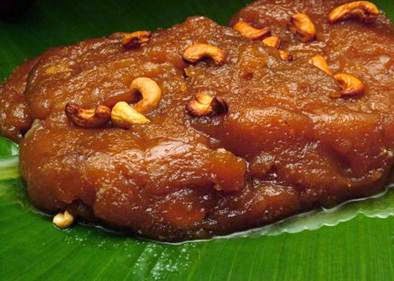 After searching through the web  for the  facts about the “story of halwa”, I found out that it was first prepared by “Rajput cooks” who were hired by the Zamindar of Chokkampatti (a village near Tirunelveli). The Zamindar after tasting the sweets from Kasi , insisted that Jegan Singh’s (the Rajput cook) family  to prepare halwa in his palace. Later Jagan moved to Tirunelveli where he opened the old and famous halwa shop “Lakshmi Vilas” , named it after a female relative who was accidentally the first to sell halwa on the streets of Tirunelveli.
The halwa is prepared over three days.
*First day the wheat milk is extracted and let to ferment overnight,
*The second day , halwa  is made
* The third  day it is sold.
Tamarabarani river water that flows through Tirunelveli District  is one more factor that gives that amazing taste to the halwa. Originally the  Singh’s  prepared the halwa all day and had time to sell them only at night. So is the famous name “Irrutukadai”(dark shop)  given to the halwa shop. They still prepare it with pure ghee that gives an amazing crust layer on top of the halwa after it is cooled. Whenever you or your friends  visit this  place “Tirunelveli “ don’t forget to ask them to bring a packet ,no at least three or four packets of this mouthwatering “Halwa” and slightly microwave it and put it in your mouth and forget  about the world for  few seconds.